On Wednesday, 26 March, the East Kent Federation of the WI held its 93rd Annual Council Meeting, with 850 members in attendance.

The meeting was opened by the Town Mayor of Folkestone, Councillor Roger West, who gave a very welcoming speech. He told us a bit about the history and newest developments in Folkestone, then concluded with thoughts about how important the WI is and the positive impact on people’s lives.

The welcoming address was given by Wendy Allen, the Federation Chairman, who sadly is stepping down this year. She told us how the WI is moving forward into the online world. She said 80% of the WI was now by email and that the East Kent Federation was developing its own website.

[Note: Apologies for the poor quality of the photos. I was using a little pocket camera from a far distance, then attempted to crop and enlarge the pictures.]

We had some wonderful entertainment, too. In the morning we heard songs by Rebecca Robinson, a local Kent singer. She was wonderful and gave us a wide variety of songs from Classical to Disney films.

Not only was she generous with her talent, she also donated 25% of her album sales that day to our WI federation!

After some announcements of forthcoming events by Robyn d’Albertson and a couple of others, we broke for lunch. This was a good time to circulate around the room, visiting old friends and making new ones. There was also a good bit of “retail therapy” in the mezzanine with handbags, jewelry, cards, and Fairtrade goods and food items for sale.

After lunch we had several presentations to various WIs for achievements, for growth, and more. Our afternoon entertainment was a talk by John Craven, BBC journalist and presenter. He covered 40 years of his BBC career, beginning with the ground-breaking children’s news program, Newsround, to his current spot as presenter on Countryfile. His talk consisted of slides and many humorous personal anecdotes, but he also expressed  his serious concern about the disappearing British countryside. 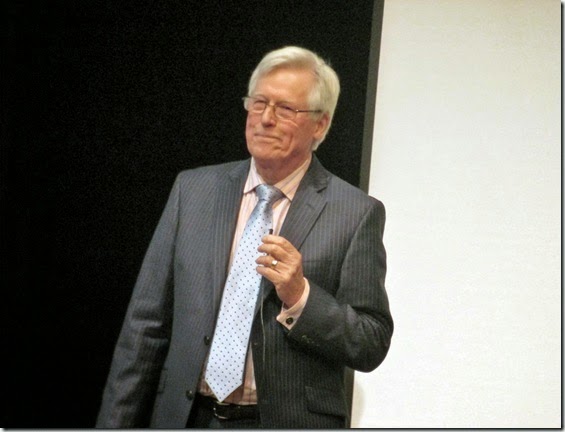 He mentioned that Britain had only 14% of the countryside in trees, where in Europe the average is 44%. He also noted the loss of hedgerows on country roads, which resulted in loss of habitat for wildlife, and that 94% of the hay meadows have been destroyed in Britain since WWII, resulting in loss of wildflowers and wildlife habitat. He also spoke about being chosen as “Panda Ambassador” by the Chinese Government and the children’s charities benefitting to the tune of £7 billion raised by sales of the Countryfile Calendar.

Just before his talk, John sold and signed copies of his book, “Countryfile Handbook,” which was offered to council meeting attendees at a discount price. Although he soon sold out of copies, he donated £1 for each copy sold. 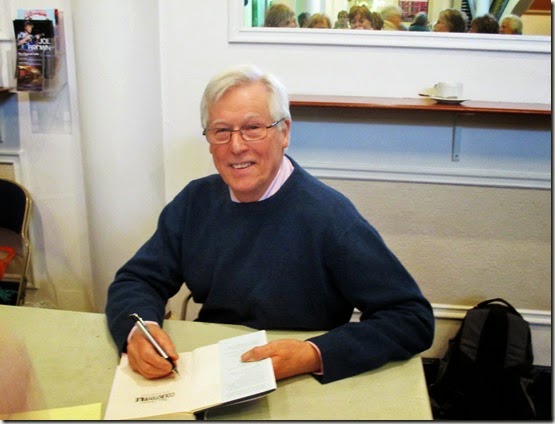 Following his talk, we had a raffle, a draw for a bursary prize to Denman College (winners were Goodwins WI, Broad Oak WI, and Minster WI), and the announcement of new elections to the Board of Trustees. Mrs Wendy Allen, outgoing chairman, presented a bouquet of flowers to the incoming chairman, Marion Rose.

The meeting was adjourned at 3:45pm and attendees left for their  rides home, exhausted but satisfied for a very pleasant day.

Our WI group has been working for this event for some time and we were delighted to receive generous funding from the Heritage Lottery Fund, without which we could not have completed the project. We have now erected a beautiful plaque on the Crab and Winkle Way in Whitstable. The plaque depicts the old Crab and Winkle railway line that went from Canterbury to Whitstable from 1830 to 1952. The Crab and Winkle Way is now a popular cycle path open to the public and people often cycle or walk it all the way to Canterbury. 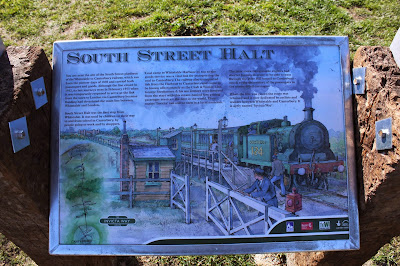 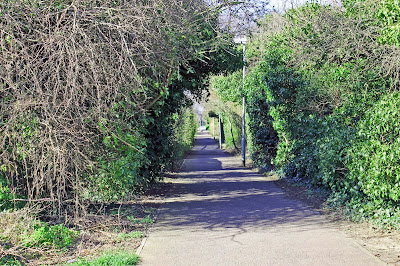 Yesterday, South Street had a formal ceremony with the unveiling, representatives from various community groups, the artist who produced the amazing artwork, and members and friends of South Street WI. 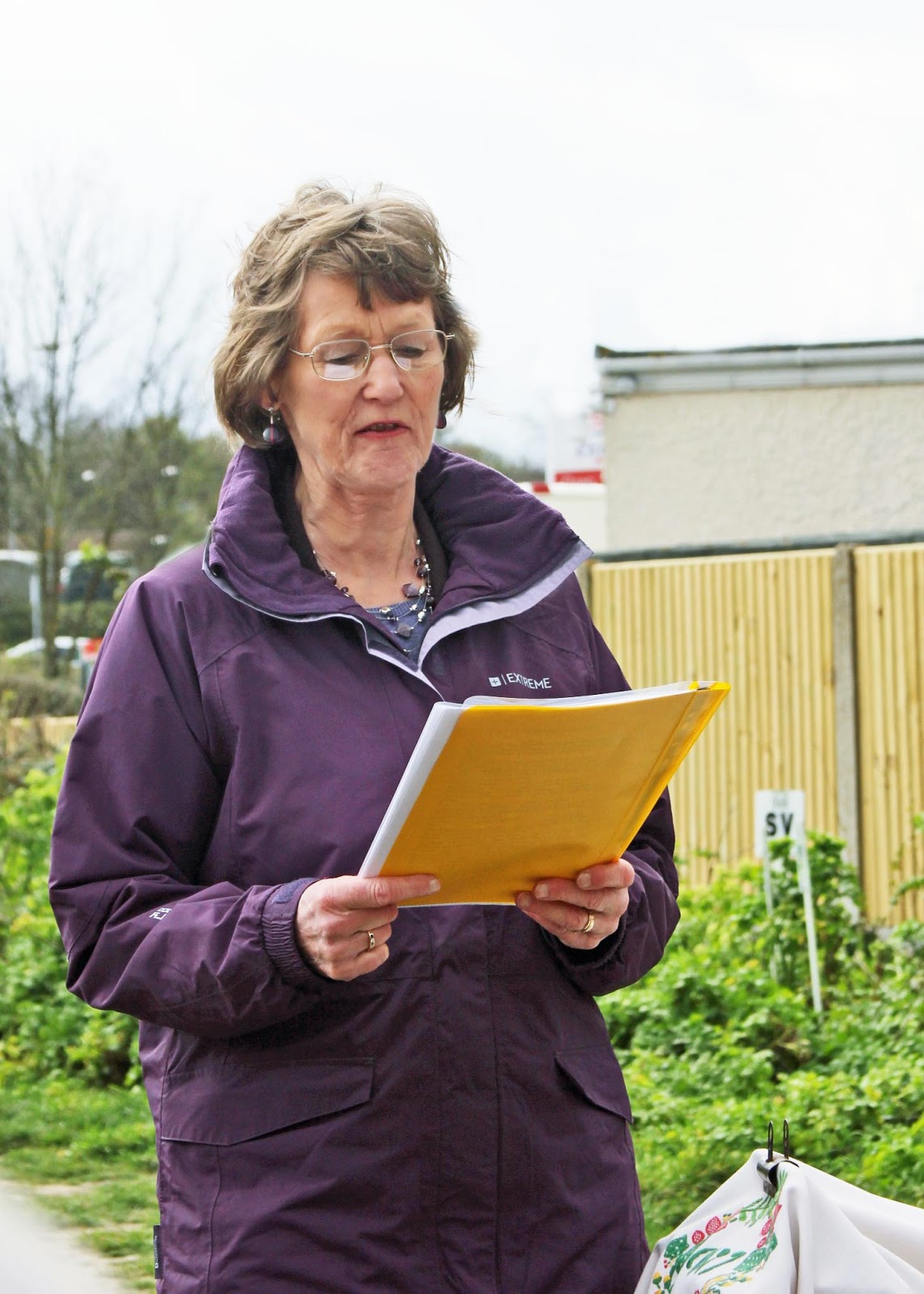 Our President, Gill Rowe, did a lovely talk explaining the history and thanking everyone involved (and there were a lot of people who worked very hard on this  project!) and then unveiled the plaque. A few of the people who braved a cold wind and threatening sky. The men in the orange jackets are from the Crab and Winkle Line Trust, others include the artist, a representative from the Whitstable Improvement Trust, and more (apologies for not getting all the names and organisations).

Remember to click on any photo to enlarge it.
Posted by JaneH at 16:13:00 No comments:

We're moving ahead with building our "online presence". We've been working on adding information to our blog (and the website, which is still "under construction"). Please do click on the links here on the blog to find out more:

The "About Us" link gives you some information about the chapter, including some of our interest groups and classes.

The "Events" link provides a calendar of scheduled activities.

At our next meeting, 12 March, Mr Martin Newcombe will be introducing us to mountain wildlife. This is sure to be a popular talk as Mr Newcombe says "...give me a mountain and I am happy. I first fell in love with them when I was very young, in the mountains of Central France. I have climbed a little, (and fallen a bit!) and wish sometimes that I had been born up a mountain. Fresh air, loneliness, sometimes cold – the best things in life!?

The talk looks at how wildlife survives in the mountains of Europe and north - eastern America. Alpine flowers, alpine scenery, snow and glaciers...... Transports you to a mountain without ever having to set foot on one!"

Each month we also have a competition that coincides with the topic. For this meeting, we'll be judging photos taken by members of mountain scenery.