Yesterday was our South Street WI Craft Fair. We wanted to celebrate our 60th year by showing some of the things our members get up to. 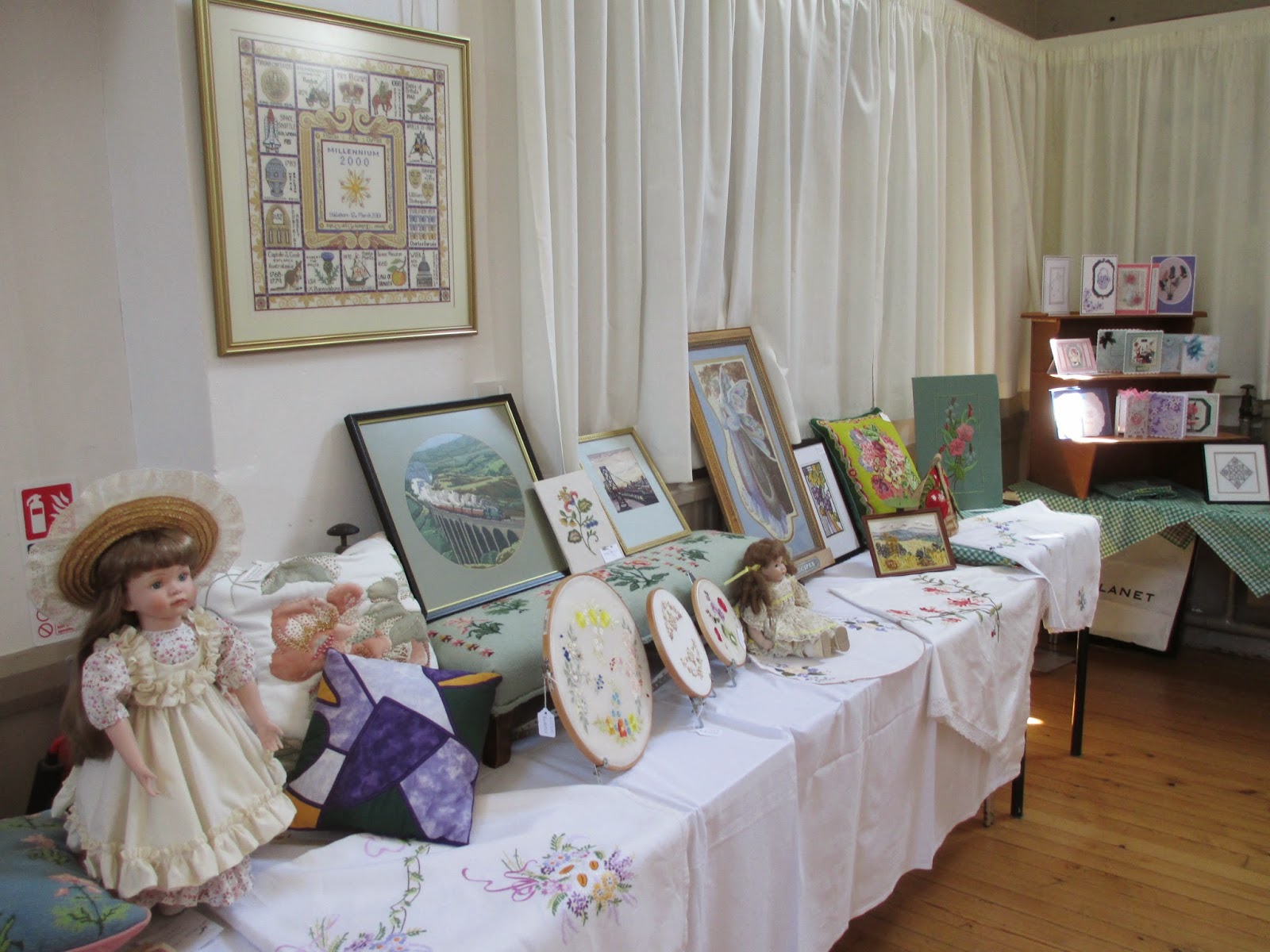 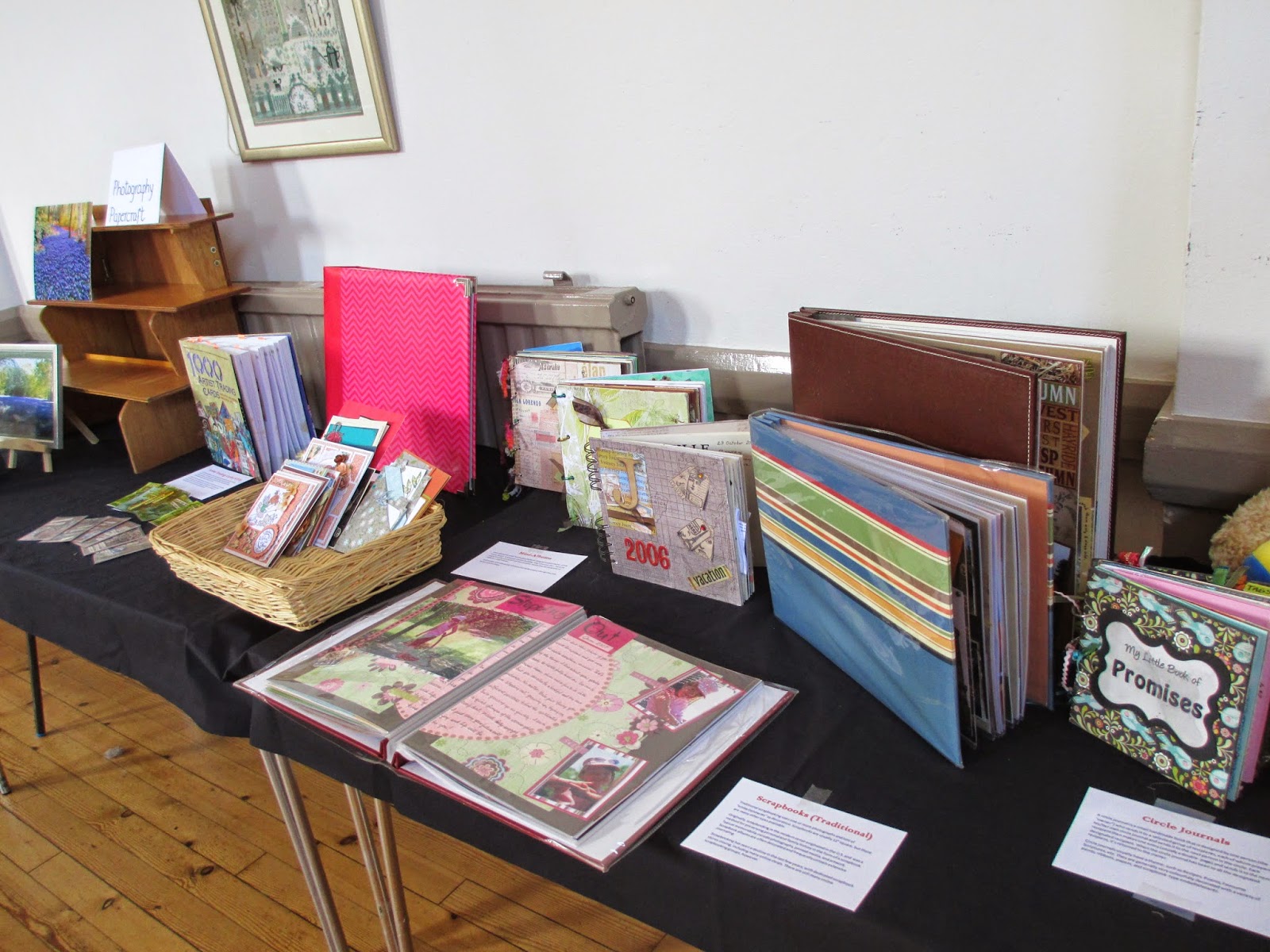 Judging by the comments of those attending, it was a resounding success. It also revealed what a wealth of talented crafters we have, as well as how varied are their crafts!


The doors opened for setting up at 11am, so the first two hours were a flurry of activity. Display tables were arranged and set up, pictures hung on stands and walls, the tea area was set up with its colourful green and white tablecloths, the exhibits were unpacked and carefully displayed, and the cakes for sale were set up.


It all looked very festive and bright for such a beautiful summer day. 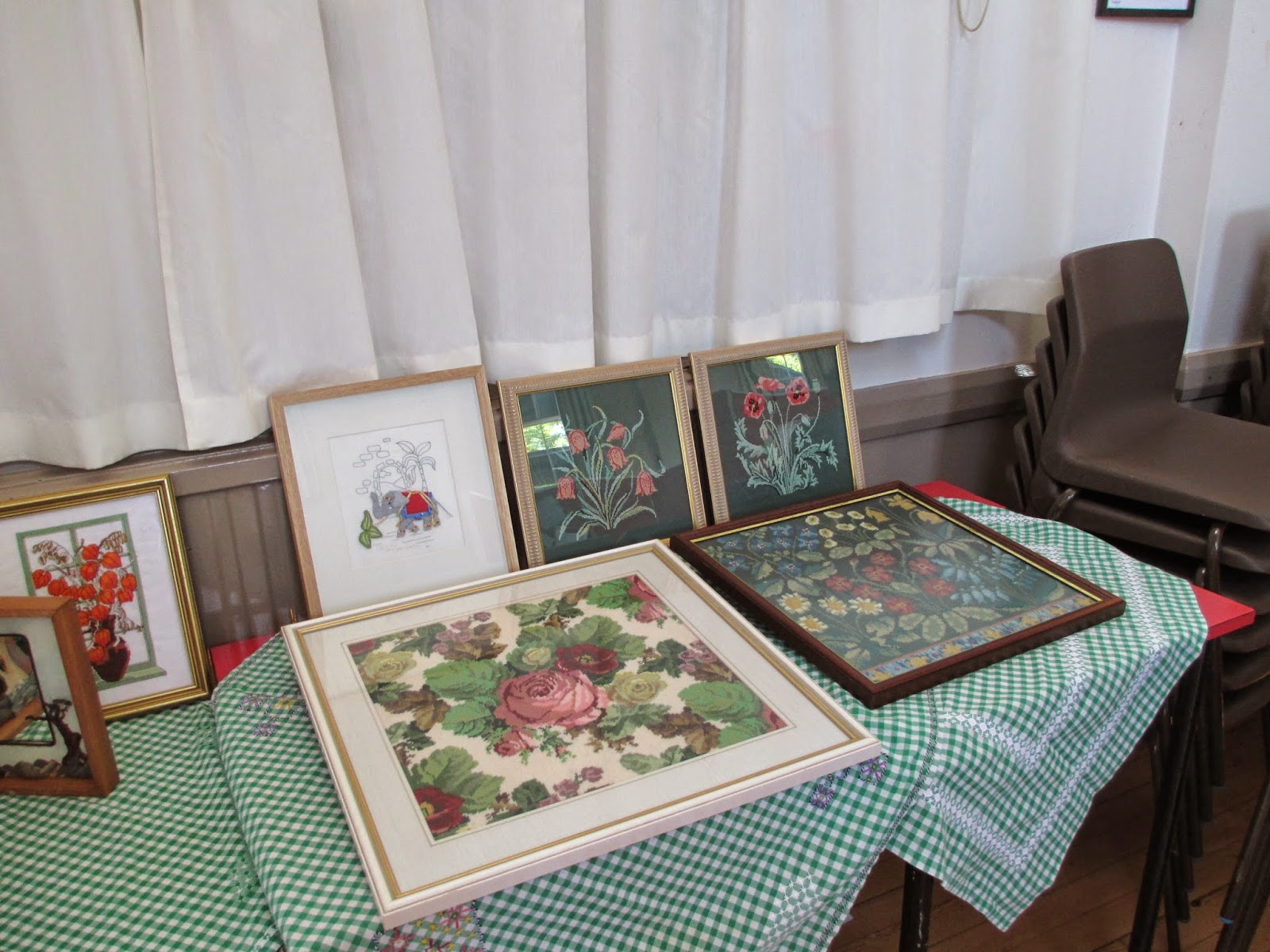 The exhibits included everything from flower arranging to jewellery making to needlework to photography and all sorts in between: wonderful tailored garments, scrapbooks in a variety of sizes and styles, handmade greeting cards, artwork, and more.

Everyone was impressed with the amount and the quality of the exhibits. 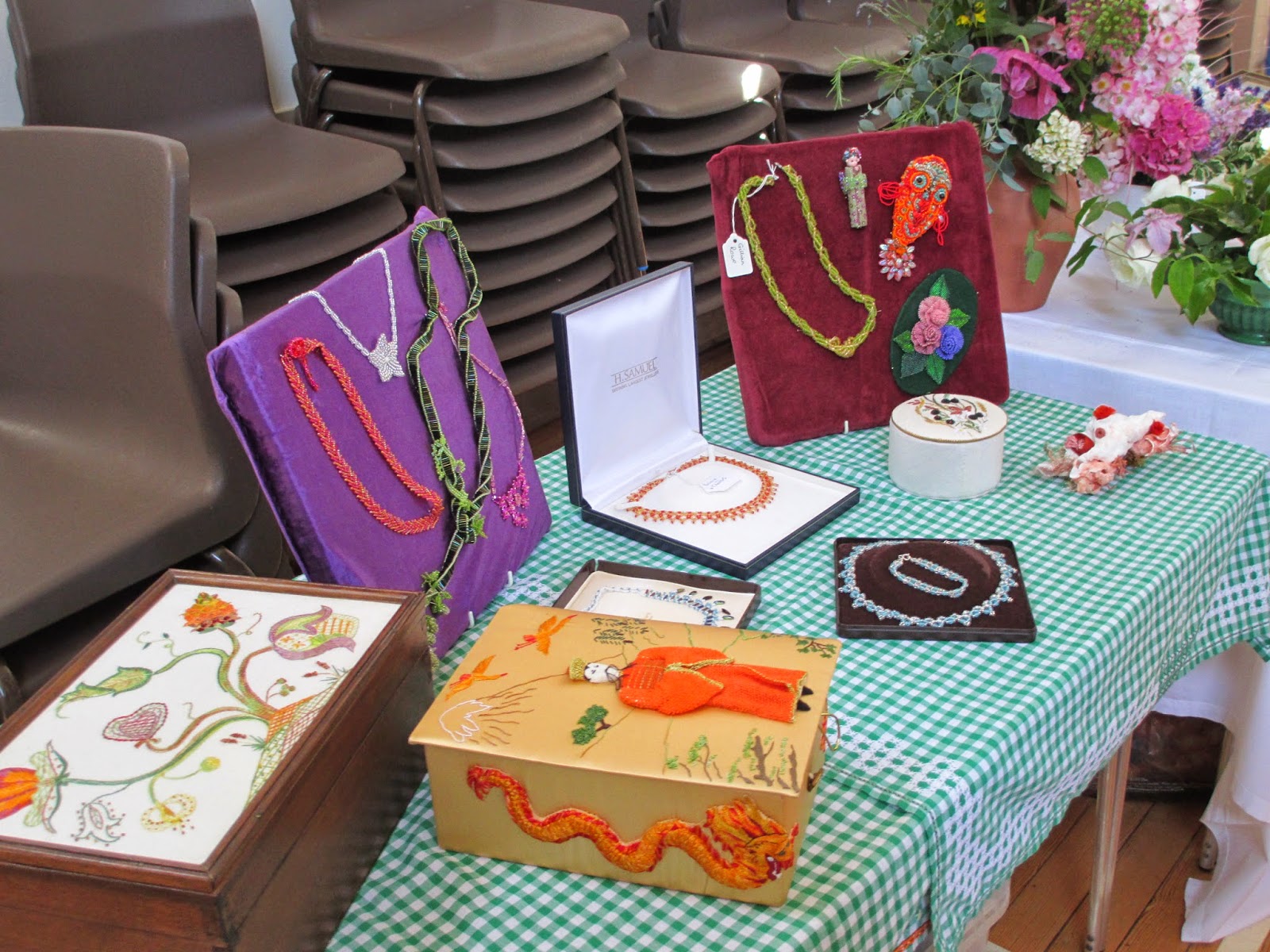 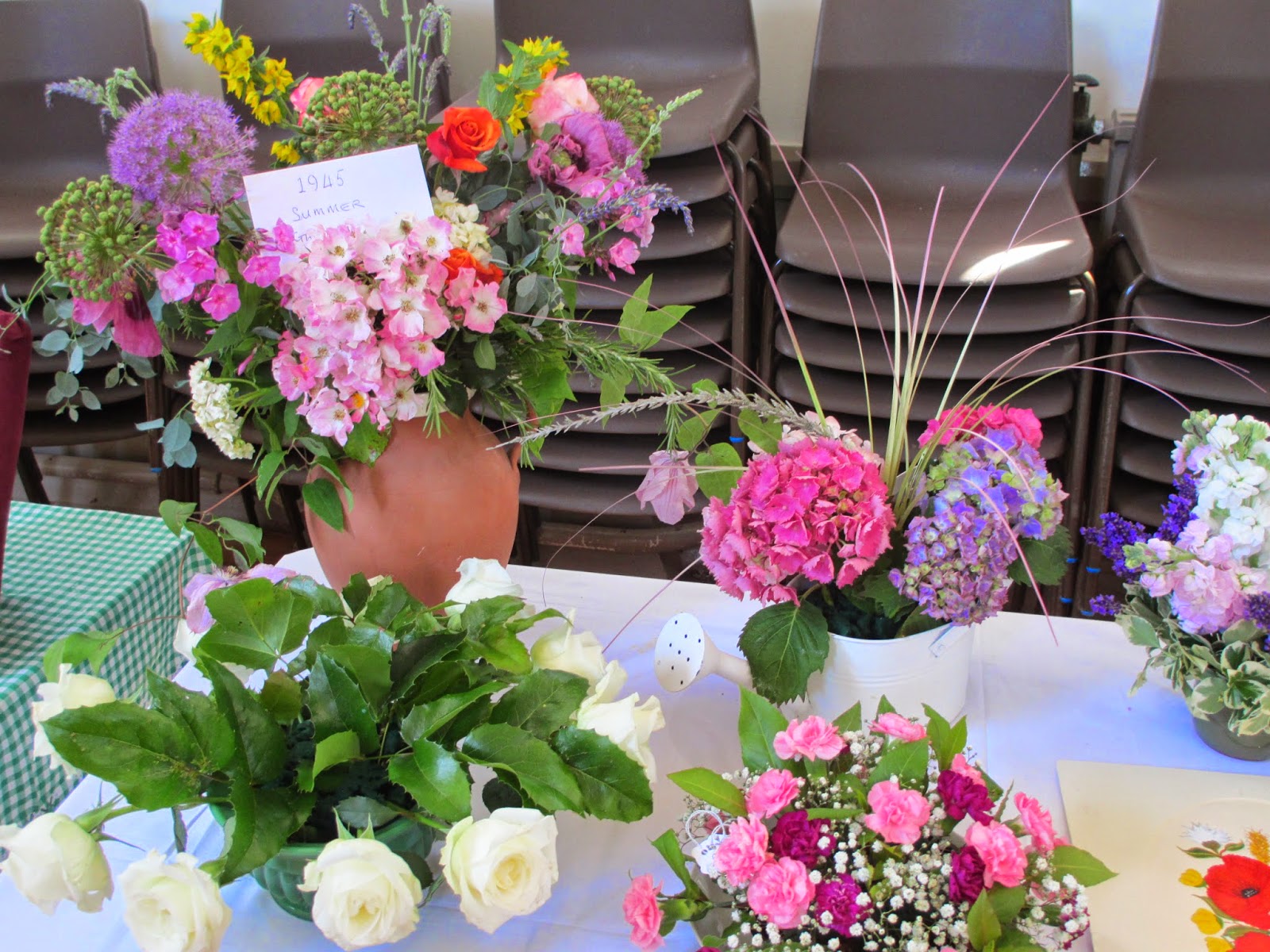 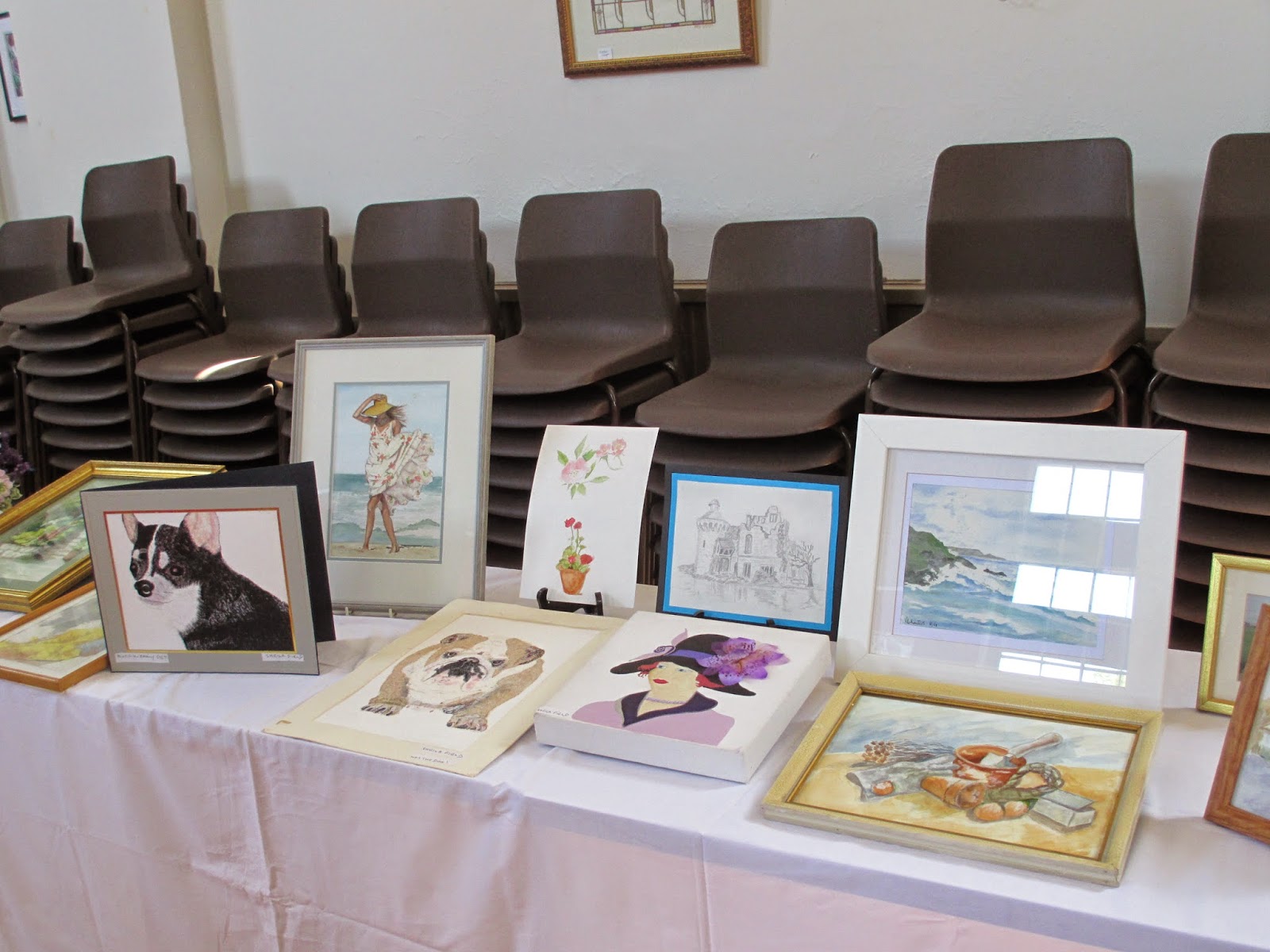 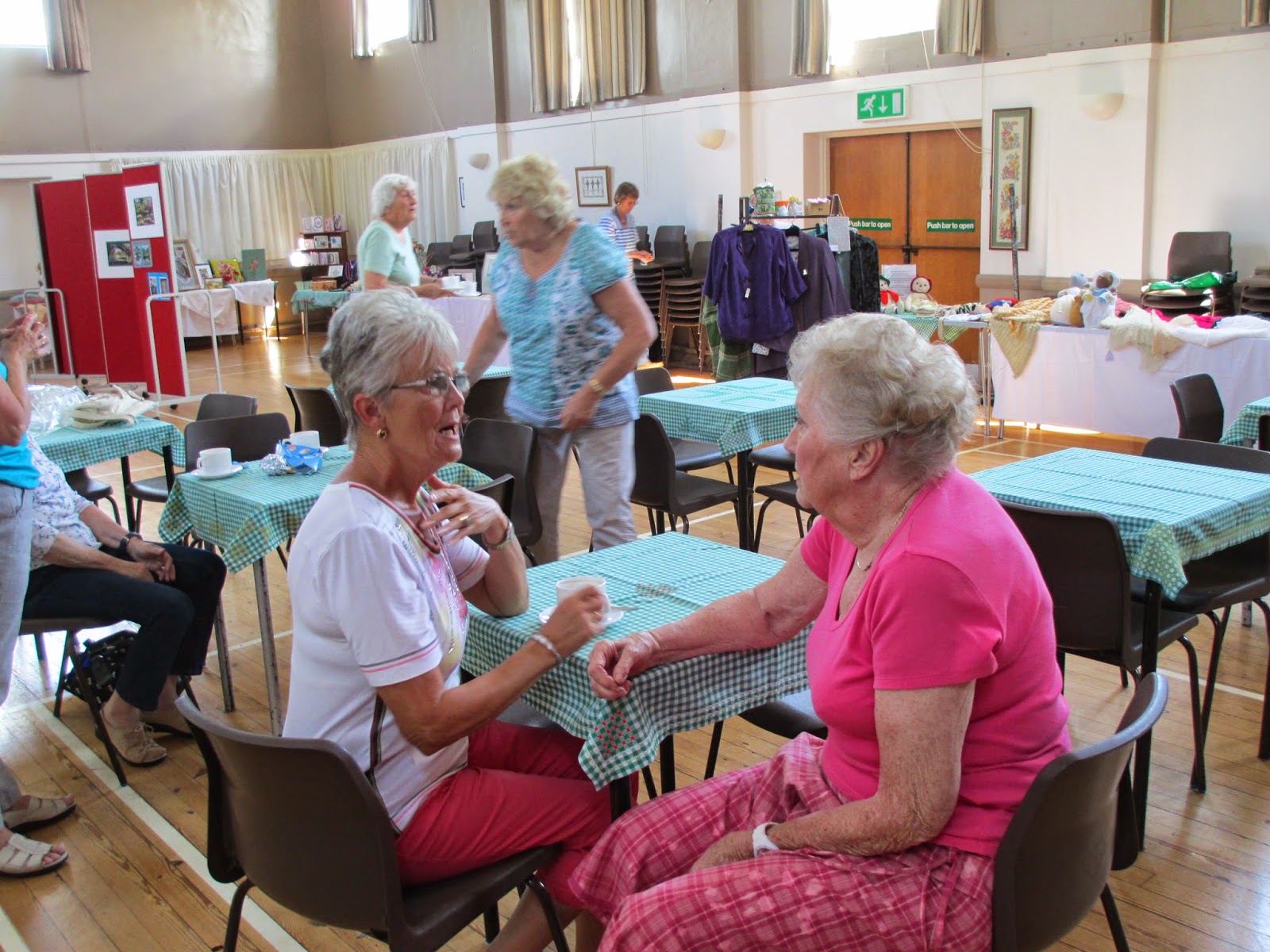 Members even had a few moments, once all the tables were set up and the displays finished, to sit, chat briefly, and rest our feet (and backs!) before our visitors arrived. 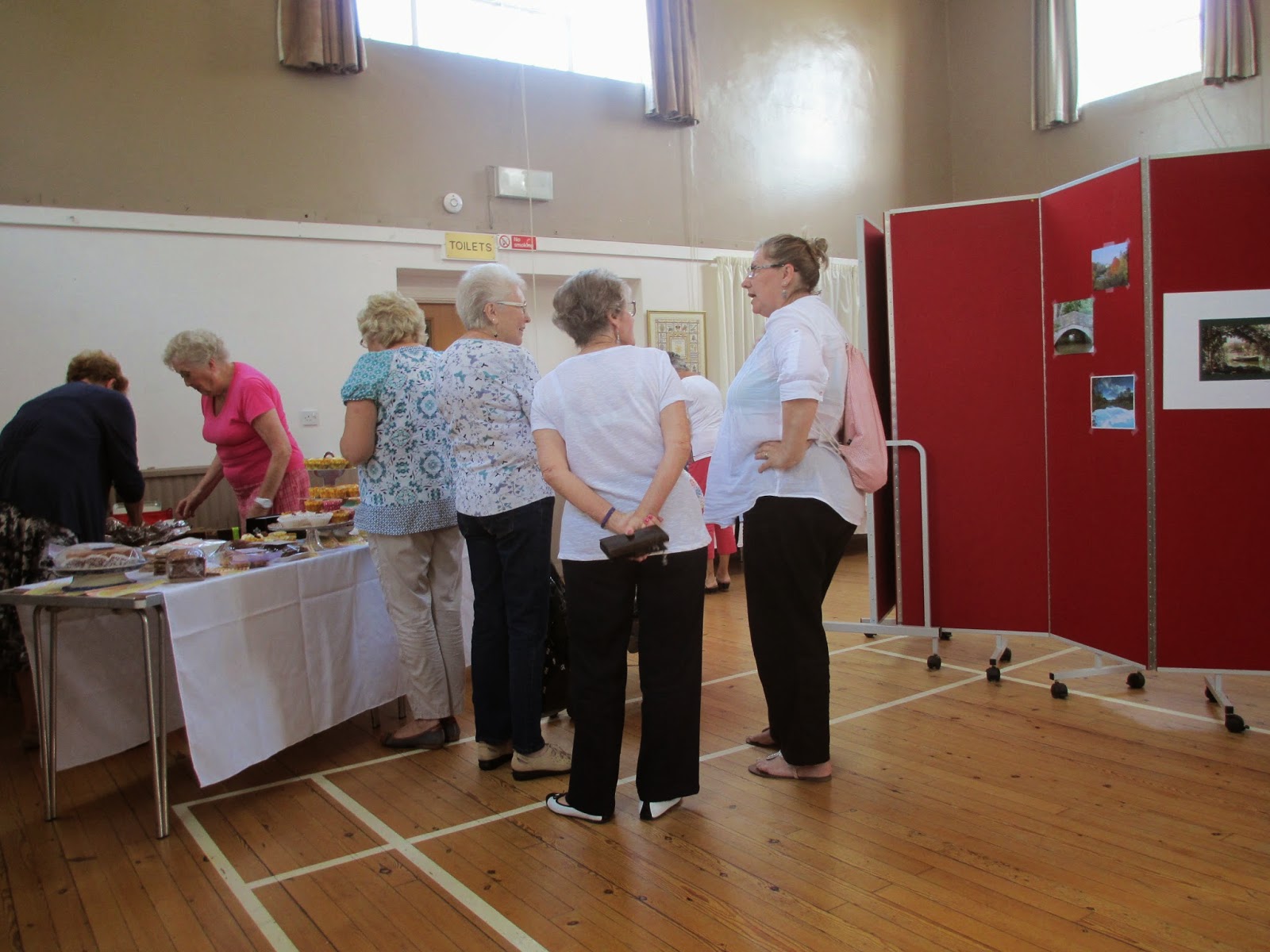 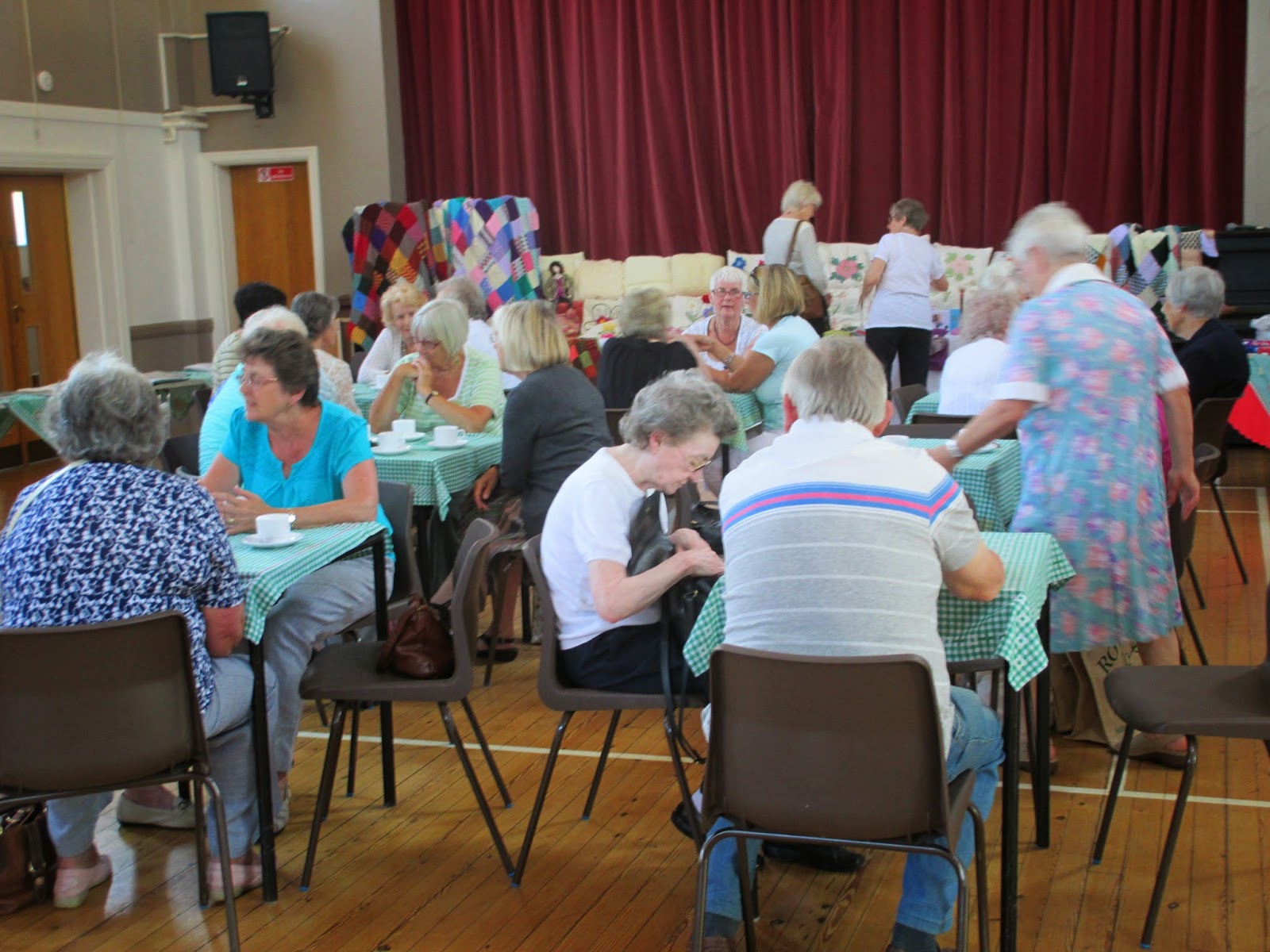 When 2pm came, we were really ready to show our goods. And the visitors did come by the carload. The admission was only 50p and that included biscuits and coffee or tea. It was a good opportunity to chat with friends and meet some new ones. Our visitors looked, they bought cake, they had tea or coffee, and they chatted. 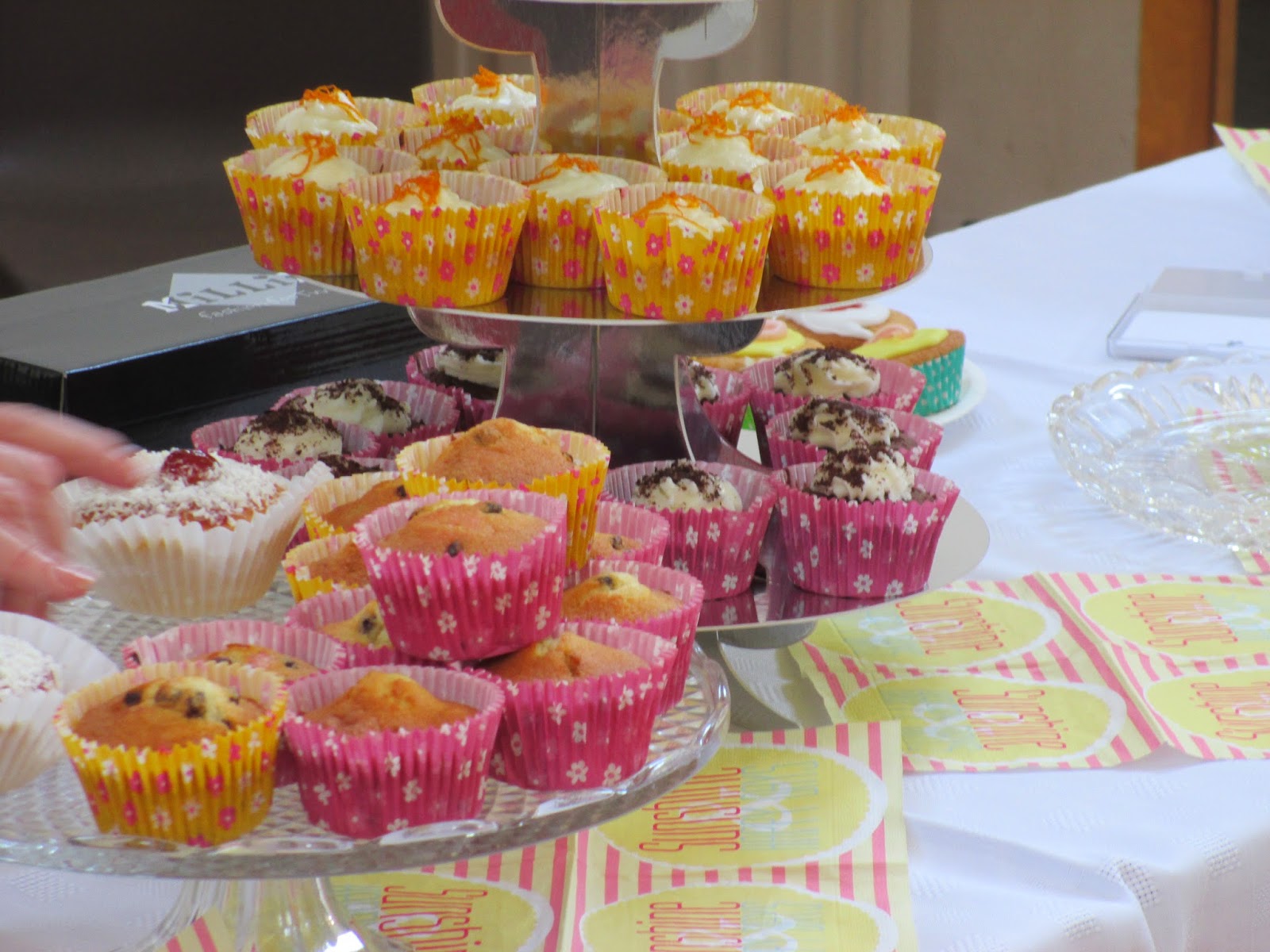 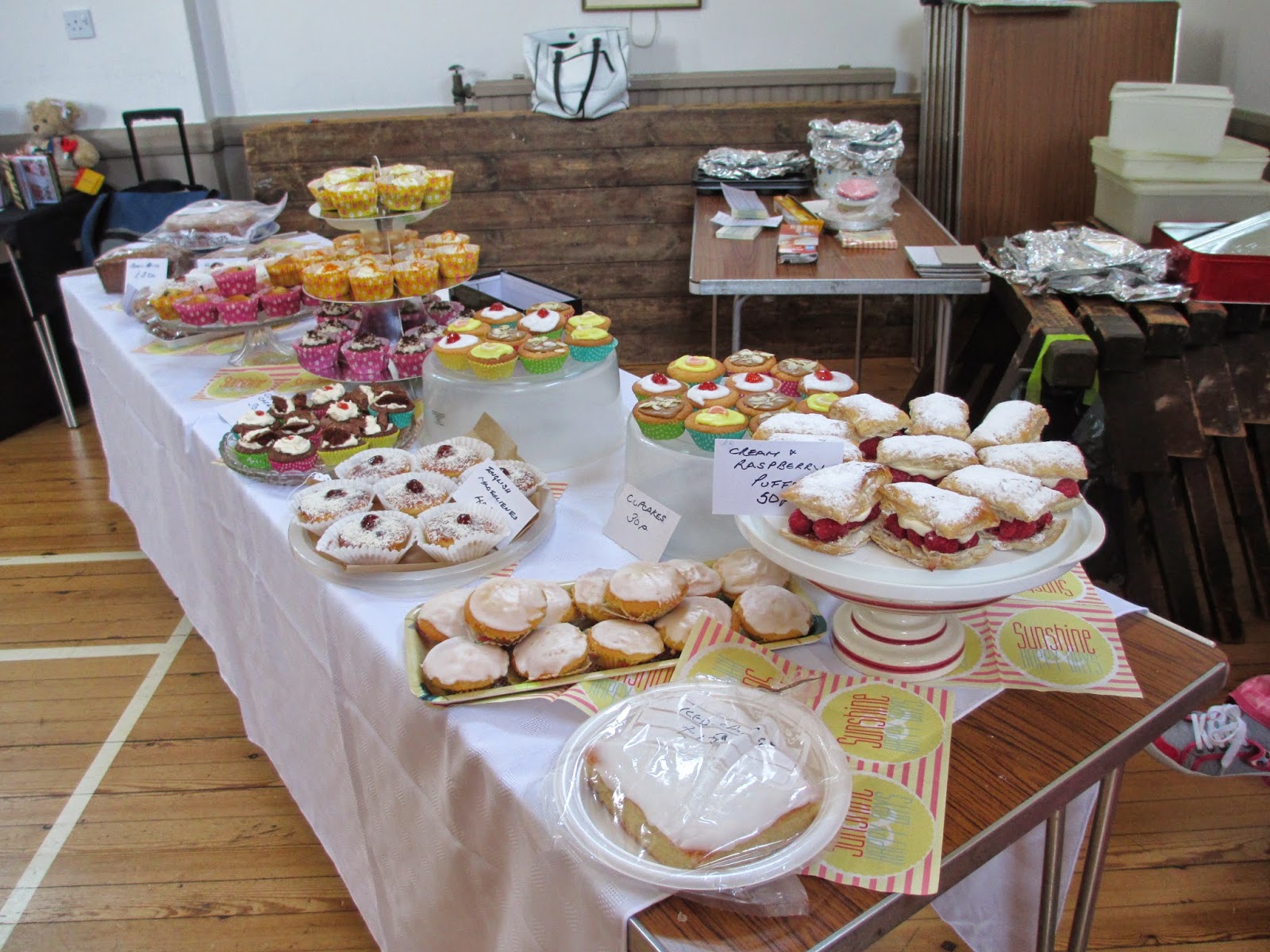 And who could resist these lovely cupcakes? Not many as there were very few, if any, left at the end of the day.

Yesterday 32 members of our WI visited London. We toured Eltham Palace and then took a boat trip on the Thames from Greenwich Pier to Windsor Pier. Although the weather wasn't great (an understatement), I really enjoyed it nonetheless. The boat trip was especially nice. Hope you'll enjoy this little photo diary: 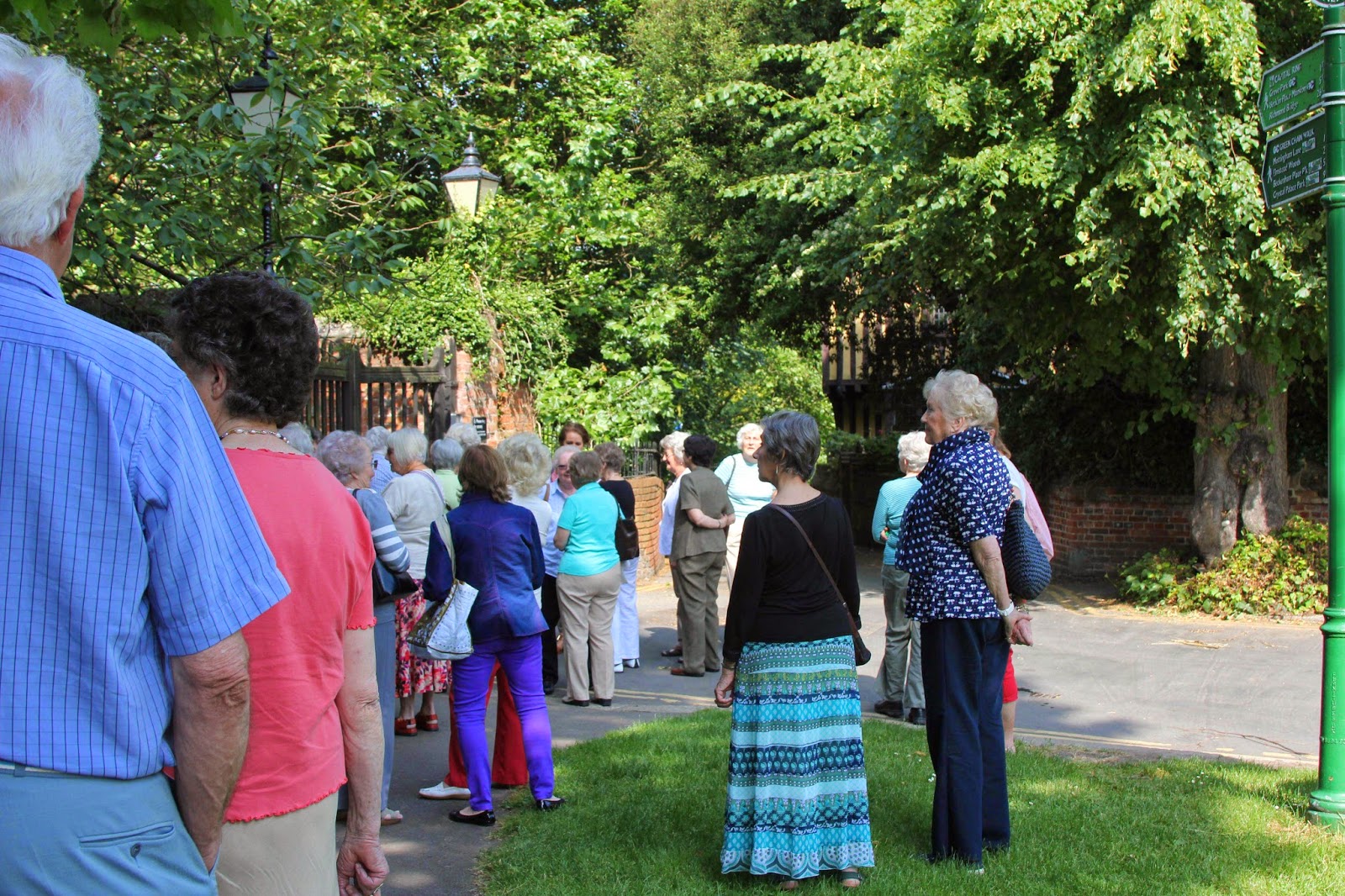 We left on the coach at 8:30am but arrived well-ahead of the 10:35am tour start. In fact, we had to wait outside for a few minutes until the entire Eltham Palace opened.  Here we are waiting patiently at the gate to the Palace. 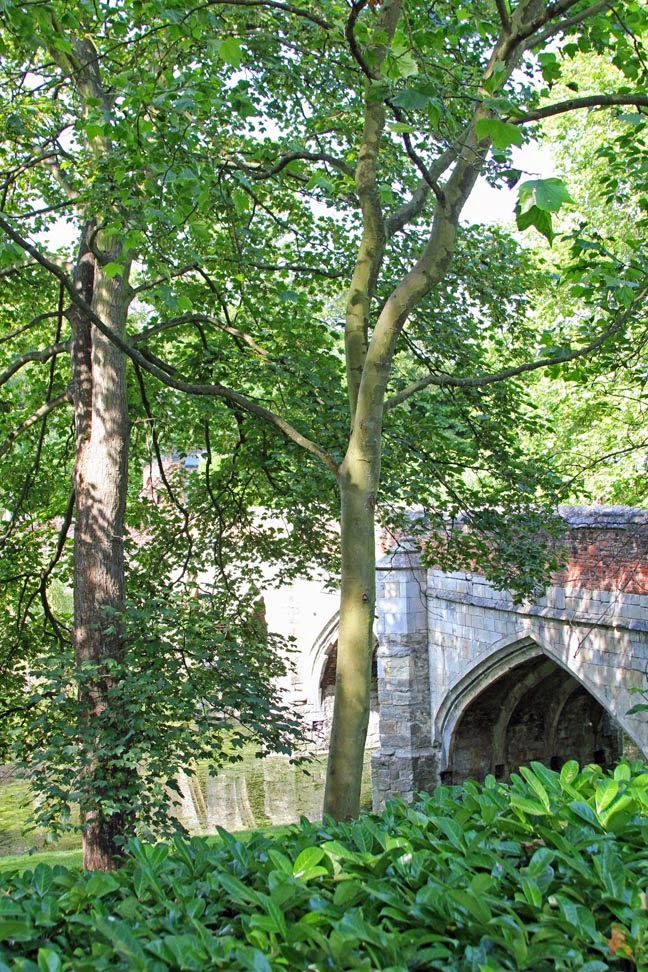 Our tour guide, Sarah from City and Villages Tours, kept us entertained while I managed to snap a few photos.

Just a word about Sarah.... she was absolutely a gem. Not only was she knowledgeable, but she had lots of little anecdotal stories, showed a wonderful sense of humour, kept us all organised, and she was constantly on the lookout for anyone struggling with stairs, needing to sit down, etc. I can't say enough good things about her!


While we were waiting, I managed to snap this photo. It shows the moat that surrounded the palace and the little bridge across the moat. Although it hadn't been used as a real palace for many centuries, it still had the moat and a "great hall" with an almost original oak ceiling. The ceiling was ornate and beautiful.

Unfortunately, as with many English Heritage and National Trust sites, indoor photographs are forbidden so I have none to show. I suppose they want to sell their postcards and don't want anyone to take photos that might be used in a way that would diminish their sales. It does frustrate those of us who just love to take photos! 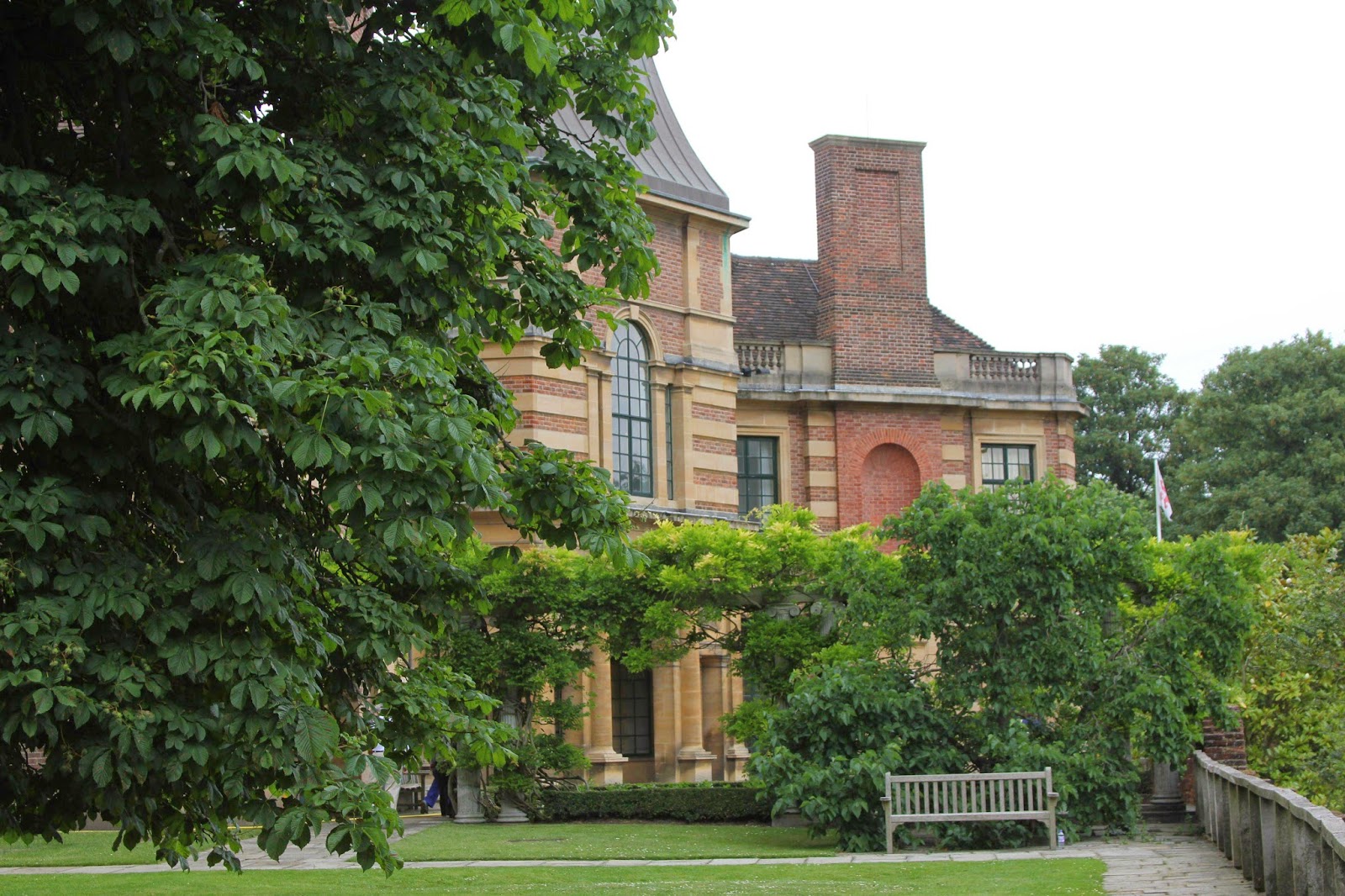 Remember, you can click on any of these photos to see them enlarged. Please do try.

This photo was taken from the upper garden. It shows the newer portion of the palace, which was completed in the 1930s. Inside, the rooms are all furnished in the art deco style of the early 1900s. It's quite striking and I imagine that when it was new and actually lived in, it was very elegant. It looks a little tired now, but having some flowers in the rooms and personal items would help tremendously. 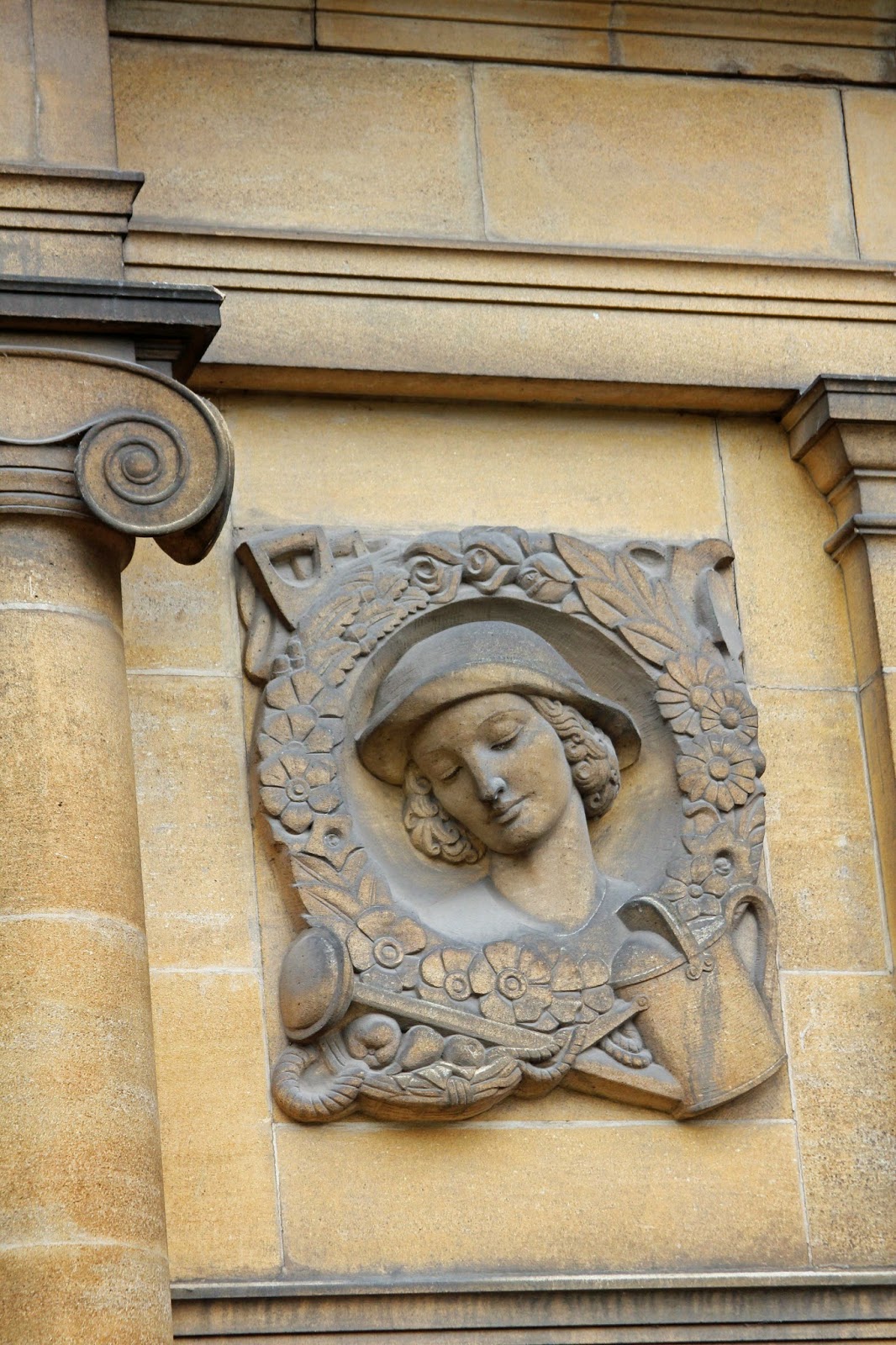 The palace is managed today by English Heritage and they do a good job. I just wish they'd turn me loose on spiffing it up, with a good budget to match of course!

This outside wall plaque is in keeping with the "modern" aspects of the palace. Some plaques are of Roman gods and goddesses, some inside of Vikings and even an Alice in Wonderland themed wall statue. The former owner, Virginia (Mrs. Stephen) Cortauld must have had quite a sense of whimsy -- she even had a pet lemur named Mah Jongg who was quite a spoiled character!

The history of the palace is not all recent, however. Its history begins in the early 1300s and continued through WWII. Our guide explained that it was a royal residence from the 14th to the 16th century, and was the home of Henry VIII as a young boy. 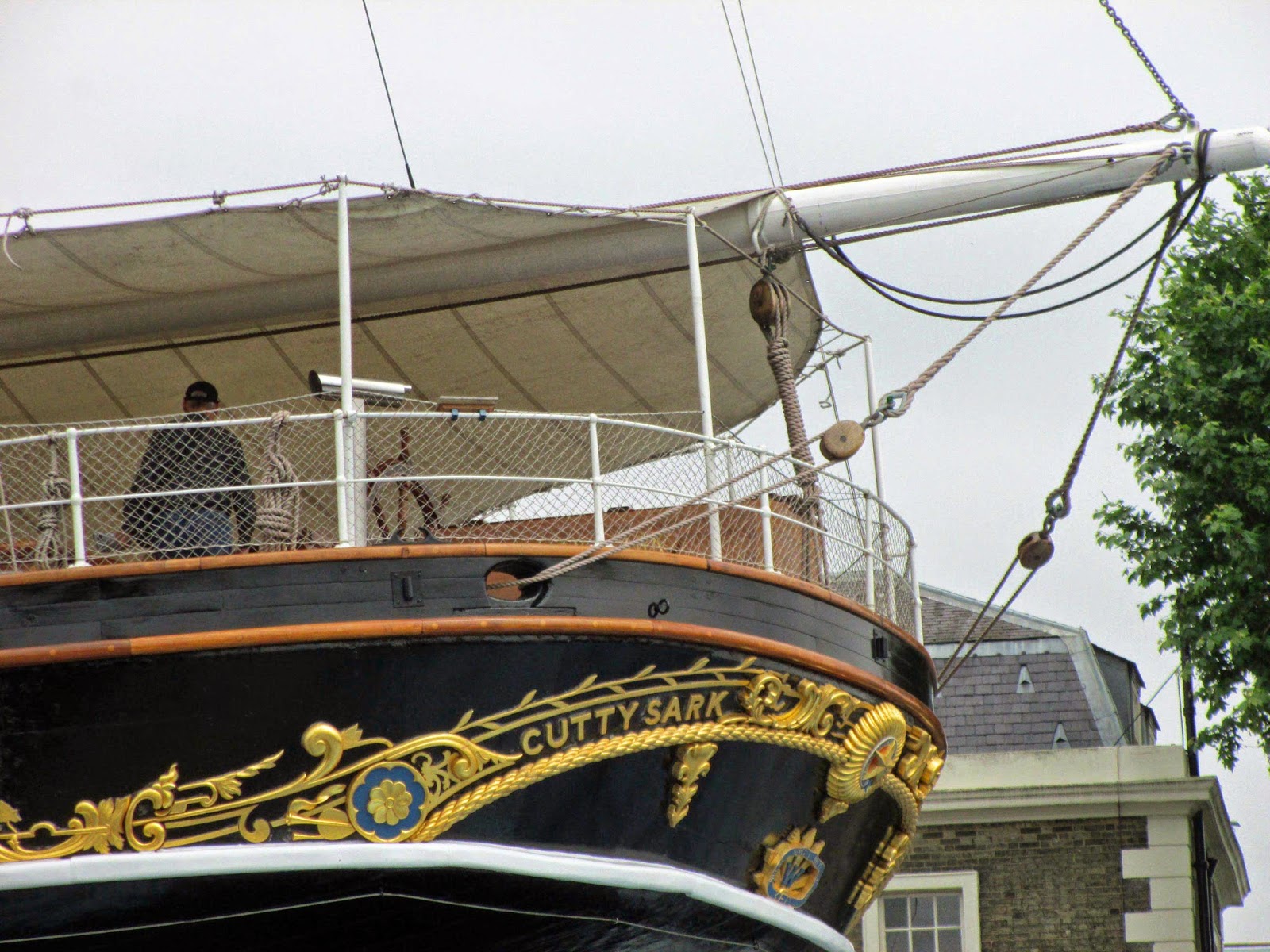 From Eltham Palace, we went to Greenwich where we had some free time for lunch. Some people went walking, others to various restaurants. I joined ten other ladies for lunch at Jamie's Italian Restaurant (Jamie as in Jamie Oliver, the famous chef), which was delicious. After lunch, we all met back up at the Greenwich docks for the boat trip. Our meeting-up place was the lovely ship, the Cutty Sark. It's been beautifully restored from the fire a few years ago. It's a really huge and impressive ship, and it has its own little gift shop and information centre, of course. 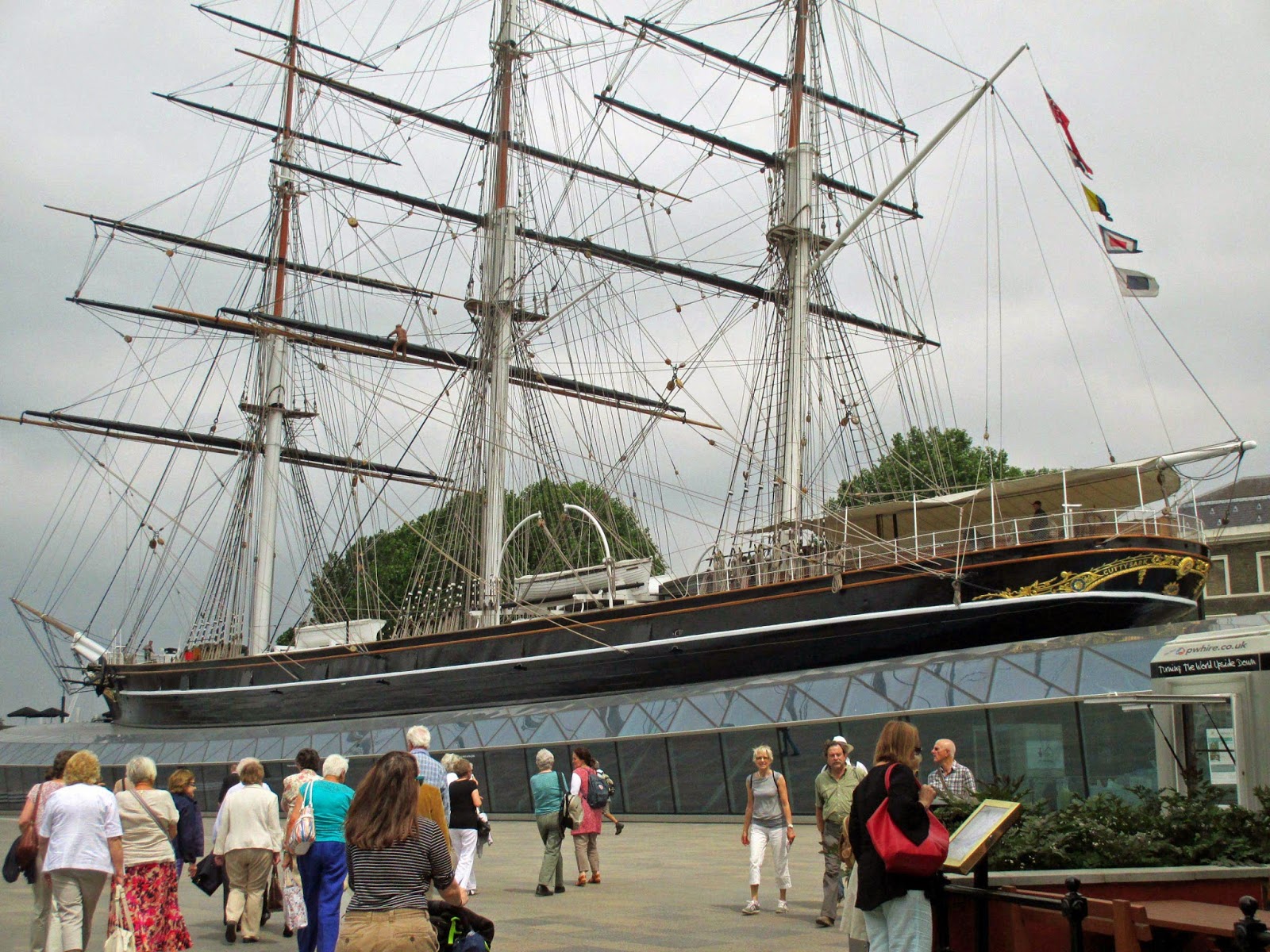 From the Greenwich docks we boarded our sightseeing boat. Some of us sat on top in the open air, despite the threat of rain and the chilly wind. Personally I found it exhilarating and even worth the climb on the stairs! 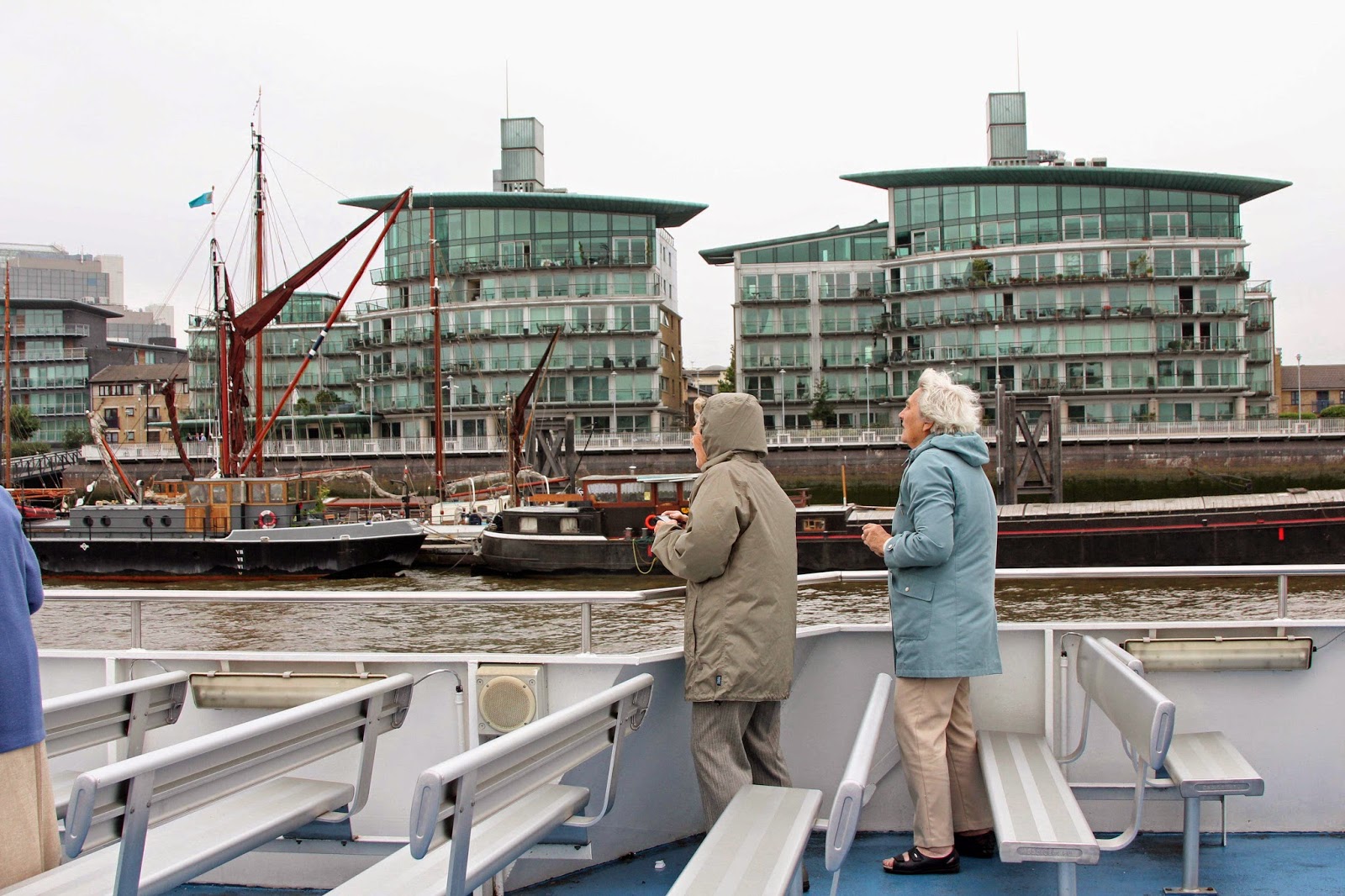 Here are two of our groups standing on top with me, taking photographs. These two hardy souls are members of our South Street Shutterbugs group, so they were determined to make the best of the photo opportunities! As you can see by the coats and hair, we had a pretty cool wind to contend with. 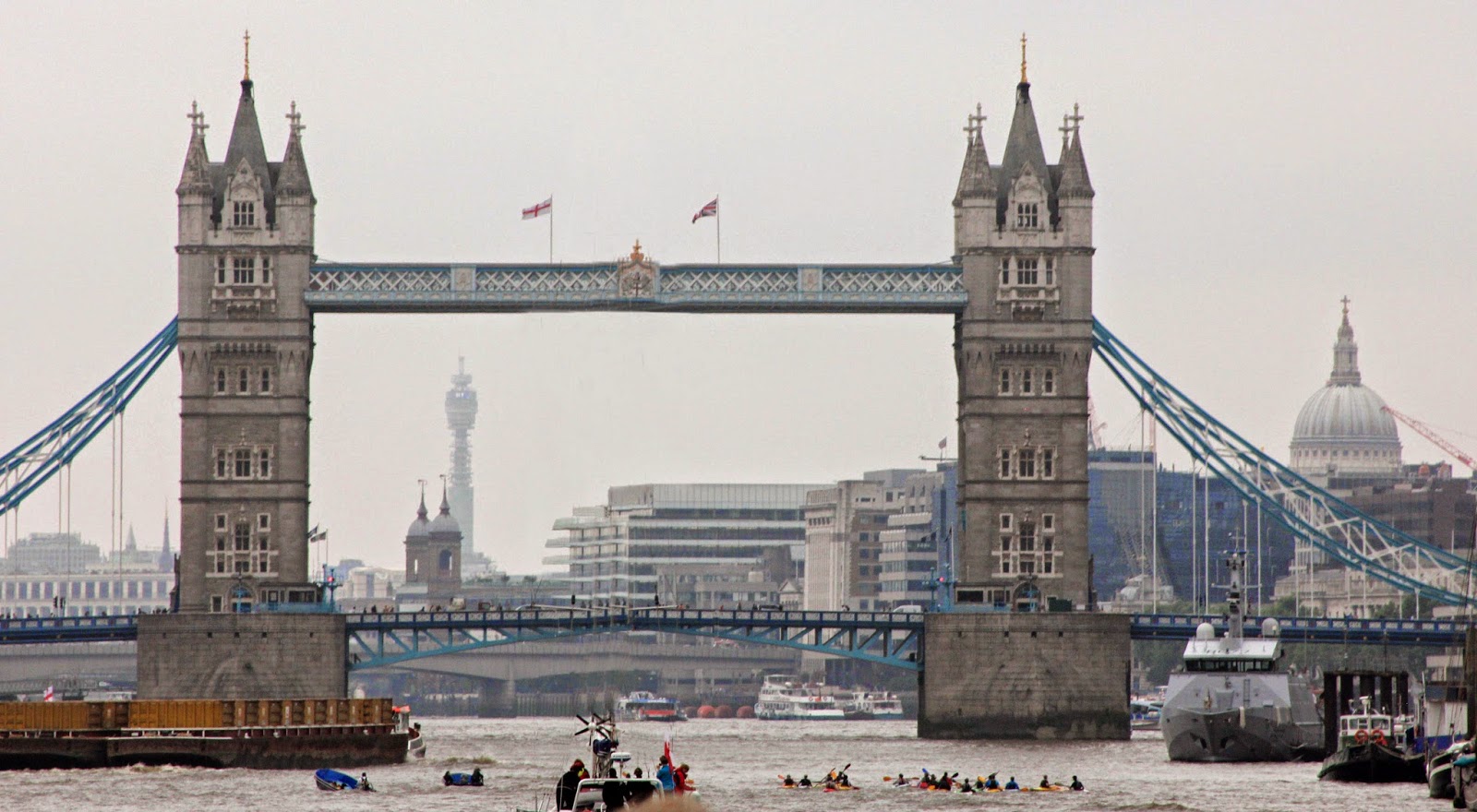 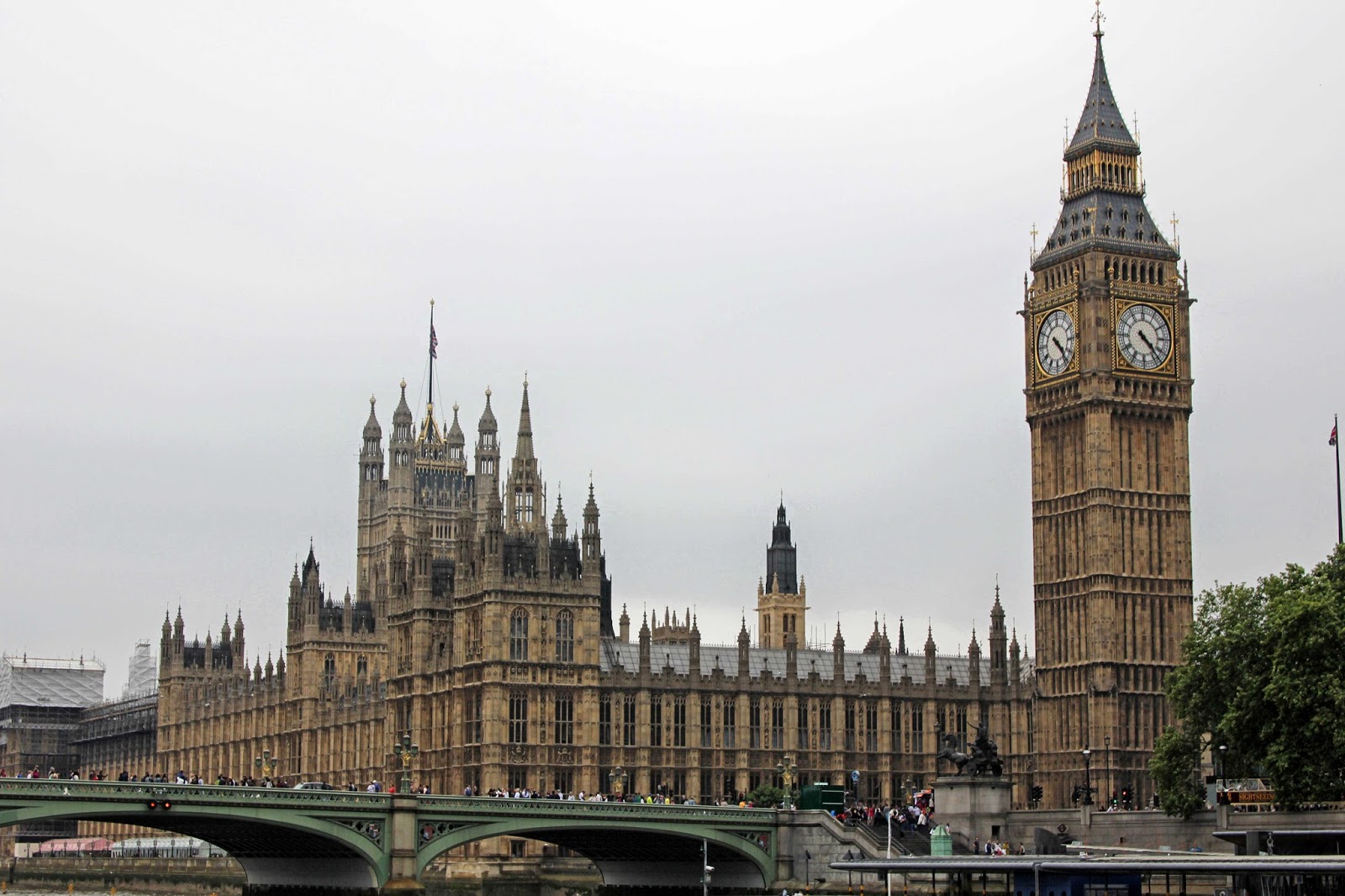 Tower Bridge. You can just see, at the bottom of the photo, a group of kayak students learning how to navigate the water. I'm glad our boat drivers knew how to get around them!

As we sailed down the Thames River, we passed many iconic landmarks. Too many, probably to show here, but we saw -- and not necessarily in this order-- the spot from which the Mayflower sailed on its voyage to the New World, carrying the pilgrims, the oldest pub on the Thames, the Houses of Parliament, the London Eye, the London skyline including St. Paul's Cathedral, and many more sights of interest.

We sailed under the Tower Bridge and ended up at Westminster Pier where our coach driver was waiting just steps from the dock.

We left the pier about 4:30pm but it was almost 6pm by the time we got through the London traffic and on to the motorway. Everyone was thoroughly tired, but in such good spirits. In the front of the coach, we even broke into a little sing-along with some 60s music on the radio.... just briefly and I'm sure the driver, Trevor, was happy about the brevity!

We arrived back home just before 7pm, and I'm sure everyone had a great time. Many thanks to Linda Swift, who arranged this outing!
Posted by JaneH at 17:38:00 No comments: