On Monday, July 13th ten of us set off in four cars in the rain for Torry Hill. Lady Kingsdown and her gardener were waiting to show us around and fortunately the rain did stop. 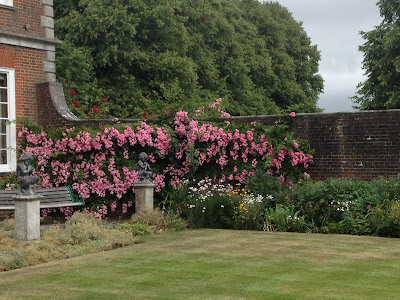 The 11 acres of gardens were laid out in the middle of the 19th century.  They enjoy a wonderful vista from the grass terraces at 500 ft above sea level to the north past the Isle of Sheppey and the Medway to Whitstable and Herne Bay.

Specimen trees of the original planting survive, despite the hurricane of 1987. To the south of the house are three walled gardens, one beside the house with lawn and traditional herbaceous borders, a beautiful formal rose garden with over 500 roses and a one and a half acre formal garden laid out in 1978, successfully designed to have shrubs and climbing plants in bloom at almost any time of the year. 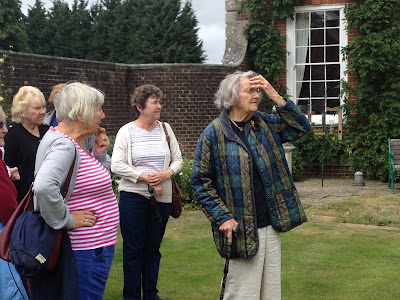 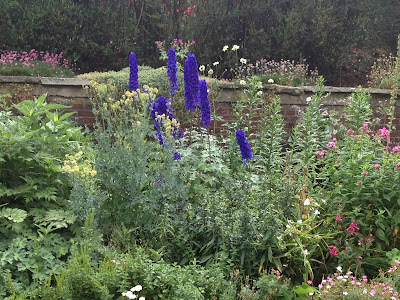 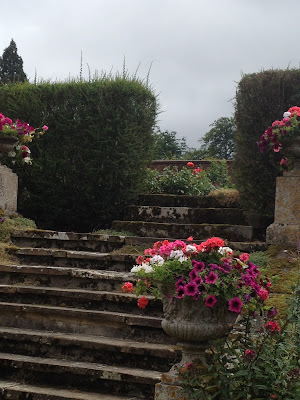 Lastly there is a large vegetable garden with asparagus, globe artichokes, rhubarb and lots of soft fruit. After our tour we went into a converted stable block for tea and homemade biscuits. A most enjoyable afternoon was had by all.
Posted by JaneH at 15:21:00 No comments:

Email ThisBlogThis!Share to TwitterShare to FacebookShare to Pinterest
Labels: Gardens

Dancing with a Star

We had a great meeting on 8 July. Ms. Ann Hall, a middle eastern dance teacher, entertained us with dance, costumes, and music of the Middle East. The costumes were so beautiful and she even asked for volunteers to try them on. 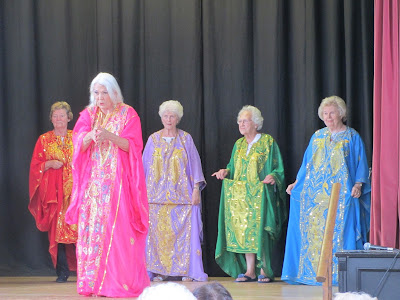 Ann brought two male helpers with her to mind the sound equipment, too. They were dressed in the traditional male djellabia, white cotton robes. 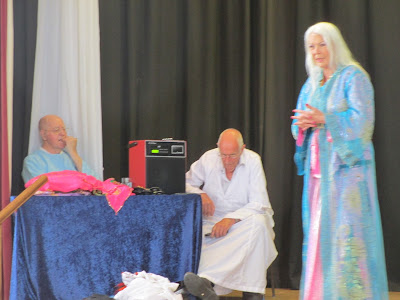 At every step of the journey, she explained the context of the music, the costumes, and the movements in the dance. The audience was enthralled throughout. 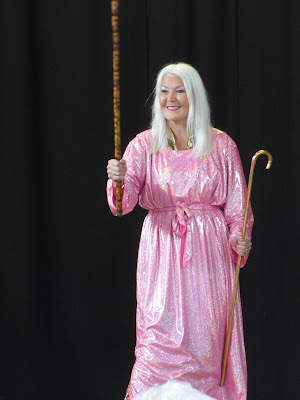 At each stage, she managed to change costumes easily and quickly, explaining the culture of each segment. 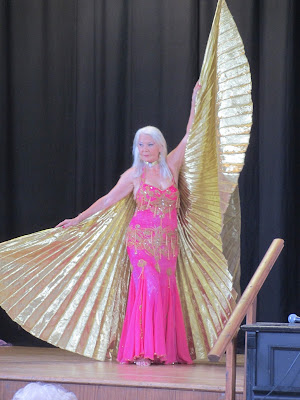 It was a great meeting and definitely not boring! The WI is for education as well as entertainment, and this programme excelled in both.
Posted by JaneH at 15:09:00 No comments:

Where England Began -- A Tour of History

Friday, 3rd July was our WI outing. We were on a City and Villages Tour titled "Where England Began", a historical look at early England and its monarchs. Our first stop was All Saints Church in Kingston, which was established in 1120 but was built on the site of a much earlier church where Egbert, King of Sussex, held his council in 838, thus cementing the relationship of church and state for generations to come. In the 10th century, altogether seven Saxon kings were crowned there on the Coronation Stone. That stone stands today near the Guild Hall. Kingston is very important to early English history.

Kingston is a beautiful little town. A pretty little canal filled with swans and decorated (as was everywhere) with bright flowers. 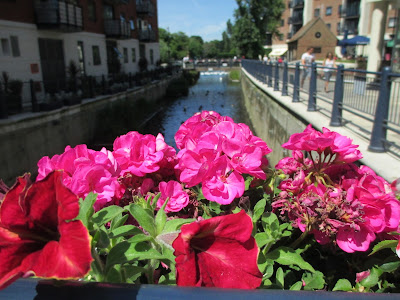 From Kingston, our coach headed for lunch at the Ye Olde Swan in Thames Ditton, a 13th century riverside pub on the River Thames.  We had a lovely lunch in the pub, then went back on the coach to meet our boat tour.

The traffic was horrendous all over the city, but our driver and the blue badge guide managed to get us through it and around it quite handily. Aside from the usual Friday traffic congestion, the Hampton Court Flower Show was in full swing so the roads were absolutely clogged everywhere. We still managed to drive through Runnymede Meadow, the famous site of the signing of the Magna Carta 800 years ago.
Now it's a lovely picnic spot and there were many people enjoying it in the hot summer sun. We also passed the Sandown Park race track, Windsor Castle, and a few other notable places.

We finally managed, about an hour late, to get to our tour boat. The effort was definitely worth it as the river tour was absolutely delightful. It was about an hour long and we had just a gentle breeze and saw so many wonderful sights along the way. We managed to get through two locks on the river, which was quite exciting, especially for us first-timers. 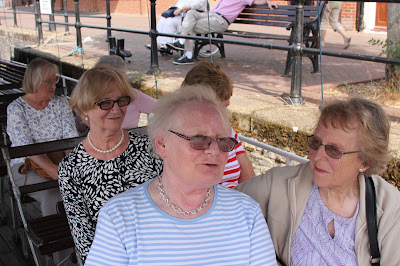 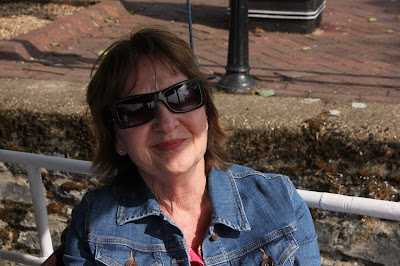 We reached our destination, Maidenhead, about 6pm, sailing past the lovely railway bridge, the Maidenhead Rowing Club and many beautiful homes and hotels along the way.
I think some of us would have been content to sail all the way back to Whitstable! By the time we got back on the coach, negotiated the traffic on the infamous M25 and other motorways, we arrived back home about 9pm, tired but having had such a wonderful day out and lots of history to think about!

And the bonus is that, for our photography group, this month's theme is "water"!

Email ThisBlogThis!Share to TwitterShare to FacebookShare to Pinterest
Labels: Days Out, London

On the 30th of June our Shutterbugs Camera Group went to the Faversham Quay. Unfortunately it was one of the hottest days in years, so we didn't have much energy for clamboring around with our cameras. Still, we managed a few. Of course we started off with cool drinks at the Pomegranate Tree tea room. The staff there could not be nicer and found us a shady spot on their enclosed patio to have our photography meeting.

This month we had chosen to do a letter of the alphabet, "P". So we had photos of pansies, peonies, patchwork, pincushions, and more. Everyone chose three prints and we had a good time hearing the stories behind each. 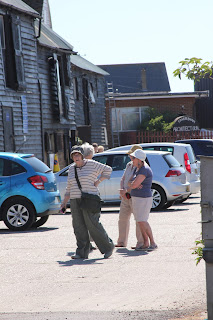 After we'd had our cool drinks, we wandered around the Quay. There was a second-hand shop, an antiques shop, etc. The tide was out, so we had to do with photos of the boats sitting on mud! 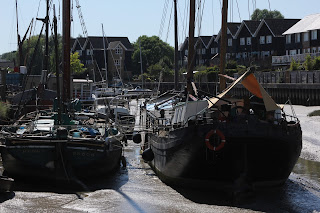 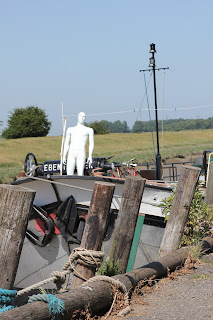 The photo above was interesting. Some ships have elaborate carvings of women at the head of the boat, but these folks had a sense of humour. This was a plastic male mannequin.... a man dummy, if you will! I wondered if he would melt as hot as it was, but he seemed very placid!

I've heard the Quay is quite busy on the weekend and perhaps there are more people and more open shops. And I'd certainly recommend that if you go, you choose a cooler day! 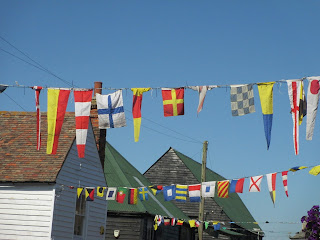 Our June Garden visit was a return to Tram Hatch at Charing Heath. Fifteen of us were shown round the three acres of  gardens by Pam and Alan Scrivens. Alan and Pam have lived at Tram Hatch for 25 years and have transformed expanses of lawn into a series of loosely defined spaces. A unique feature of the garden is the River Stour which runs parallel to the gardens. 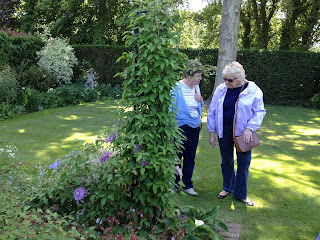 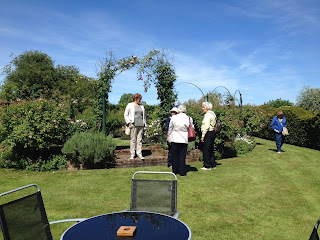 There is a huge selection of flowers and a large collection of trees including cornus, beech and acers. A highlight of the afternoon was the large formal rose garden with beautiful David Austin  blooms. There is also an orchard, large vegetable garden and ponds fringed with plants. 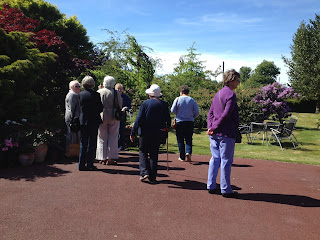 After looking around the garden most of us had a strawberry cream tea, which was delicious.

Submitted by Jenny Roberts
Posted by JaneH at 14:17:00 No comments: