This week was the annual East Kent Federation ACM in Margate. As usual, we alternate years between the Winter Gardens in Margate with Leas Hall in Folkestone. It's difficult to find a venue in Kent that can hold over 1,000 WI members!

This year we were privileged to have as speaker Terry Waite, who was held hostage for nearly five years in Lebanon. He served as the Assistant for Anglican Communion Affairs for the then Archbishop of Canterbury, Robert Runcie, in the 1980s. As an envoy for the Church of England, he travelled to Lebanon to try to secure the release of four hostages but in doing so, he was himself kidnapped and held captive from 1987 to 1991. He explained that for much of that time, he was in solitary confinement, not allowed anything to read any books or newspapers or to listen to any news until the end of his five years when a sympathetic guard brought him some books to read. Unfortunately, the guard didn't read English so brought him whatever books in English he could find. Mr Waite found humour in the first selection, "Great Escapes", and later in "The Mother's Guide to Breastfeeding." I wish I had a recording of his speech or had at least taken notes, but I think we were all enthralled with just listening.

Mr Waite gave a wonderful inspiring talk, the gist of which encouraged everyone to never give up. During the lunch break, he patiently signed some of his books (for over an hour), which completely sold out. 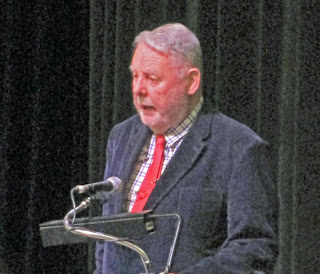 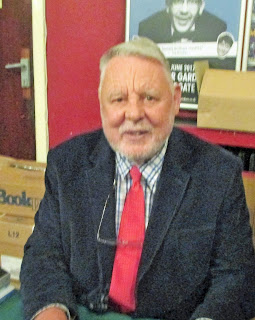 Please excuse the very poor photographs! I was using my small camera which used to take fair photos but lately it's been acting up. Mr Waite was very gracious to pose for his photo.... he didn't know how bad my camera was!

There were over 1000 of us attending and we were all caught up in his talk! Even the next day, we were talking about it.

The  second speaker was from Pilgrim's Hospice and she gave a very thorough overview of what that charity does and how they help beyond the hospice care. This year there was no entertainment as there was in previous years, but it was a good day out and for catching up with many friends and for hearing Terry Waite!