We had another great meeting on Wednesday, 10 July 2019. Mr. Andrew Ashton delighted us with a talk on the humour of the late artist, Beryl Cook. 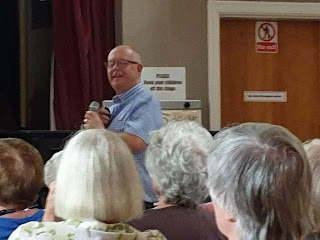 We learned a lot about her life as well as about her art. Born in 1926 in Surrey, Beryl had no formal art training and didn't even take up painting until her thirties. She first tried water colours but soon changed to acrylics and oils, which allowed her to paint the magnificent textures and detail we see in her work.

Beryl's subjects were the ordinary, every day people she seemed to love and who she found warm and humorous: girls out on a hen night, sailors and prostitutes, "naturist" people having tea in the garden, and more. Although she was shy herself, her characters were often flamboyant. In fact, when she was awarded an OBE, she did not attend because of her shyness! 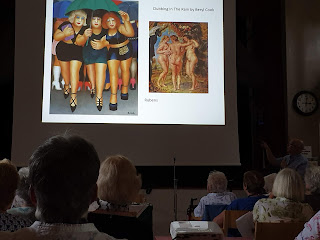 He showed us slides, side-by-side of her paintings, of other well-known works of art that inspired her. He felt that she was undervalued by the art world, pointing out the detail in her paintings that made them special and instantly recognizable.

We had a competition table that members contributed of works similar to Beryl Cook's, which he kindly judged for us, too. 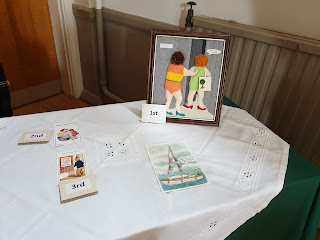 Mr. Ashton had the whole WI hall laughing. Everyone agreed it was one of the best afternoons we've had! And what could be better for the soul than a good laugh with friends?